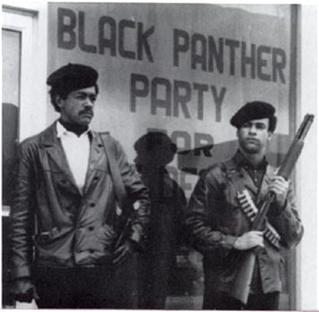 I recently heard a great podcast episode on the Black Panther Party by Revolutionary Left Radio. Some of the issues raised on the show reminded me of research I did for my PhD thesis that never made it into the final edit. This research was on different factions within the civil rights movement and attempts from outside of the movement to moderate it. My thesis focused on the animal advocacy movement but in looking into the role of financial considerations in shaping animal advocacy, I looked into research on financial considerations and moderation in a wide range of social movements, including the civil rights movement. I am by no means (anywhere near!) an expert on this topic but it was something that was just at the “edge” of my research and I found what I read on this issue really interesting, so thought I’d share my writing summarising some key points from these texts. I believe the issues raised in these texts are very relevant to debates and tensions going on in a wide range of social movements today. See the references at the end if you’d like to look further into the sources yourself.

This article is mostly based on information from this book – see below for an online link to it.

In the book The Revolution Will Not be Funded: Beyond the Non-profit Industrial Complex, Andrea Smith (2007) outlines the historic and contemporary role of foundations set up by millionaires and corporations, and their moderating influence on social movement organisations and social movements generally. The first such foundation in the United States was established in 1907 and since then there has been a continual increase in foundations, non-profits, and donations from individuals, corporations, and foundations. These foundations initially acted as a tax shelter for corporations, but also quickly focussed on moderating movements for social change. While these foundations supported measures to ameliorate social problems, the instigators wanted them done in a manner that did not challenge capitalism. For example, amid strikes by Colorado miners in 1913, the Rockefeller foundation worked to reduce the social and political unrest by giving relief to individual workers, but saw workers organising through unions as a threat to society. It was feared that these developments could lead to more fundamental changes. After World War Two, many foundations moved beyond merely philanthropic giving and began to try to engineer social change and influence social justice movements (Smith, 2007, p. 4-5).

The Civil Rights Movement in the 1960s

A particularly good illustration of how this can work in practice is the way the Ford Foundation and others actively attempted to steer the civil rights movement in a more conservative direction (Smith, 2007, p. 5). The Ford Foundation did this through directly funding the Congress of Racial Equality (CORE) with $175 000 and also through giving $500 000 to the Metropolitan Applied Research Centre (MARC) (Allen, 2007, first published 1969, p. 55). CORE’s outside funding rose from $4 604 in 1952, to $130 609 in 1960, to $694 588 in 1964. There were also huge increases in the outside funding of the civil rights movement generally at this time (Haines, 1984, p. 36). According to a text by Robert L. Allen (2007, first published 1969, p. 55), the Ford Foundation was able to not only directly influence the activities of CORE through funding that organisation, but they also indirectly influenced CORE through funding MARC. This funding was used to create civil rights fellowships, where the fellows (including the Reverend Martin Luther King, Jr. and many leaders from CORE) received a salary to a level roughly equivalent to those they were then receiving from their organisations or private employment.

MARC was headed by the psychology professor Dr. Kenneth B. Clark, whose strategy was to get large corporations involved in the ghettos of American cities. He argued that ‘business and industry are our last hope…they are the most realistic elements in our society’ (cited in Allen, 2007, first published 1969, p. 55). MARC set about trying to calm Cleveland’s racial tension, which the Ford Foundation had been attempting to do for years (Allen, 2007, first published 1969, pp. 55-56). The Ford Foundation made a donation of $175 000 to the Cleveland chapter of CORE, which was to be used for ‘training of Cleveland youth and adult community workers, voter registration efforts, exploration of economic-development programs, and attempts to improve program planning among civil rights groups’ (Allen, 2007, first published 1969, p. 56). CORE was perfect for the Ford Foundation because their militant rhetoric meant that they appealed to discontented African-American people (unlike “old-style” moderate leaders), but their ambiguous and reformist definition of black power as simply black control over black communities differentiated them from “genuine” black radicals who the foundation saw as too dangerous. Similarly, funding from the foundation appealed to CORE because before it received this funding it was several thousand dollars in debt. CORE had struggled financially as its promotion of black power scared away potential financial supporters (Allen, 2007, first published 1969, pp. 55-57).

The Ford grant to CORE was a success in the eyes of the foundation – there was no rebellion in the summer of 1967 (serious riots had occurred in 1966 and the early spring of 1967) and tension was further eased when Carl Stokes became the first African-American mayor of a major American city in November 1967. The voter registration drive and voter education program initiated by CORE (and funded by the Ford Foundation) played a significant role in this election (Allen, 2007, first published 1969, pp. 55-57). King and his associates in many organisations advocating for civil rights ‘were increasingly defined as moderate or, at the very least, as “responsible” militants’ (Haines, 1984, p. 34).

Both CORE and MARC attempted to negotiate with the power structure on behalf of African-Americans and the poor. They were seeking more government and private aid, and, rather than challenging the existing economic and political structure of US society, they pushed for the poor to be included in this structure. Floyd McKissick, who was the second CORE official to get a MARC scholarship, criticised capitalism but not in a fundamental manner: it was not that capitalism itself was wrong, the problem was that black people were not able to fully participate in it at the time. CORE had no intention of tampering with the “free enterprise system” beyond increasing black involvement in this system, with black power increasingly being equated with the power of black business and black capitalism. Partly due to indirect control and manipulation from the Ford Foundation (Allen, 2007, first published 1969, pp. 60-62), ‘far from aiding in the achievement of black liberation and freedom from exploitation, [CORE] would instead weld the black communities more firmly into the structure of American corporate capitalism’ (Allen, 2007, first published 1969, p. 62). Most in the civil rights movement ended up calling for reform rather than revolution (Haines, 1984, p. 33).

Allen, R. L. 2007, first published 1969. From Black Awakening in Capitalist America. In The Revolution will not be Funded: Beyond the Non-profit Industrial Complex, ed. INCITE! Women of Color Against Violence, 53-62. Cambridge, Massachusetts, U.S.: South End Press. 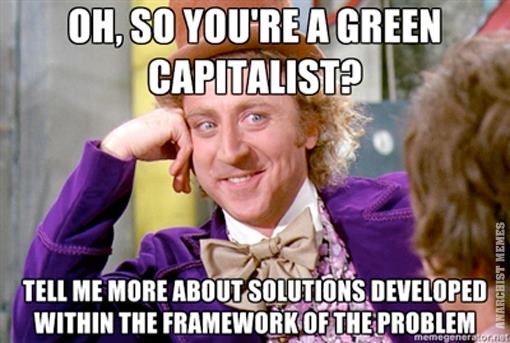 We recently did a podcast episode where we explained how we’re voting this election. We got some feedback questioning why we’re voting for far-left parties like the Socialist Alliance ahead of the Greens in the Senate. This has a lot to do with the limitations of “green” capitalism.

We are anti-capitalists, so feel we have more in common with an anti-capitalist party like the Socialist Alliance than pro-capitalist parties like the Greens (even though we’re not state socialists). More specifically though, while we like and respect the Greens and think they have a lot of positive, progressive policies, we also acknowledge that they support (and are one of the biggest proponents of) the idea of “green” growth and “green” capitalism. They do not fundamentally challenge Turnbull’s “jobs and growth” mantra but simply tweak it to “green jobs and green growth”.

We have done a whole episode challenging this idea of “green” capitalism, featuring sociologist Dr Caleb Goods, who did his PhD on the topic of “green” jobs and “green” capitalism generally. I thought a graph from his book Greening Auto Jobs: A Critical Analysis of the Green Jobs Solution, which we discussed on that episode and is displayed below, is particular telling. It shows that fossil fuel emissions have only ever gone down in times of economic downturn and up in times of economic growth. So for those concerned about the environment, it makes sense to challenge this idea of growth, which is an inherent part of capitalism.

While we hope that the Greens get more votes than the two major parties, we are preferencing parties like the Socialist Alliance ahead of the Greens, to encourage the Greens to challenge growth. On episode 136, we discuss preferential voting and why it makes sense to preference parties taking the climate emergency more seriously than the Greens, for example by challenging growth. This can send a message to the Greens – just as the Greens encourage people to vote for them to send a message to Labor.

I hope that more people voting for parties like the Socialist Alliance who challenge economic growth will encourage the Greens to embrace the idea of degrowth. I believe that to take the climate emergency seriously, a move towards a degrowth economy is essential.